How is Apart of Me helping bereaved young people?

We have evaluated the impact of Apart of Me using in-app metrics and an independent evaluation. Here is what we found:

Apart of Me has been downloaded more than 85,000 times since launch

Apart of Me is rated 4.7 on the UK App Store

I would recommend it… when you’re a kid and you lose a parent there aren’t many people around you who understand what you’re going through. It’s really helped me.

It’s a really nice way of learning how to deal with loss… it’s relaxed and calming and you’re not forced to do anything. You can play it the way you want to… it’s guided but not pressured.

Overall, Apart of Me is working extremely well to engage and support young people who have recently been bereaved, through both the content and gaming elements of the app.

This is a particularly difficult audience to engage:

Therefore, the fact they have responded so positively to Apart of Me is a significant achievement.

The study points out:

The different elements of the app work well together to create a safe and supportive environment for young people to explore their emotions around grief and there is clear evidence from this study that the app helps young people in a number of different ways:

The app delivery format allows young people to access support on their own terms and in their own time, which means that support can be delivered in real time and at a point of real need.

Below we present the standout details from the report, annotated where possible with quantitative data recorded by the app.

We commissioned Selena King, an independent researcher, to investigate the effectiveness of Apart of Me. Her full report is available for download here or you can view a presentation of the results on slideshare.

The research objectives for this project were:

Overall, there was a very positive response towards the game and many said that the game had helped them to feel better about their situation, in particular:

Yes, I would recommend it, it’s really good, it’s really flexible and it’s always with you so you’ve got help whenever you need it.

The concept and objectives of Apart of Me are generally well understood i.e. it is a resource aimed at young people to help with grief following a bereavement.

Being delivered in a game format was seen by many as a new, relevant and effective way of providing support around a bereavement.

The report identifies the core audience for Apart of Me as 13-16 year olds, bereaved for more than 6 months and less than 2 years.

Participants enjoyed finding and collecting the rocks, fireflies and bottles, and the search for new items creates a hook that keeps them coming back.

This increases the likelihood of them engaging with and digesting all of the different elements.

It’s calm, soothing and relaxing, it lets you go at your own pace.

Just playing it is really relaxing anyway, just wandering about not doing anything in particular you can hear the sound of the waves and the birds, they’re relaxing noises so even if you don’t want to do anything particular while you’re in there you can just have the phone on and listen to the noises.

The report provided detailed feedback about each of the game's therapeutic elements including the Rockpool, the Cave, the Quests, the Emotional Checkin, the Fireflies and the Bottles. Further details are available in the full report but the overall feedback was positive and validates our design intentions.

The report also contains recommendations for improvements which we have incorporated in our development roadmap.

This study showed that engagement is likely to be strongest amongst 13-16 year olds.

Whilst we suggest that Apart of Me maintains its broad target age of 11-18 year olds, we recommend that 13-16 year olds are the key focus for any development of the game and its content.

We also recommend targeting the game at young people who have been bereaved between 6-24 months, as they are most likely to be open to, and in need of, this kind of support.

This information will help us target out outreach efforts. Outside of this demographic Apart of Me still has potential to reach people as our many positive reviews demonstrate.

It was noted that the game is limited in terms of capacity to keep young people engaged after the game has been completed, which may leave young people feeling a gap.

Whilst the gaming elements could be developed to increase longevity, care should be taken not to overshadow or restrict the support elements of the game.

We recommend considering different ways to continue to engage young people once the game has been completed.

We are currently working on a project to build and enhance the Apart of Me Community. Watch this space for more detail soon!

Develop a bank of stories for the Cave that can be rotated and refreshed each visit.

Ensure that different types of loss are well represented in the stories and, if possible, target them to relevant users early on in their experience.

Create more differentiation between the different meditations at the Rockpool and consider using a variety of different voices to create broader appeal.

Ensure that all the emotions that are offered in the Check In are also covered by the Fireflies so people can explore them more deeply.

Many of these feature improvements were already on our roadmap, those that weren't have now been added!

In-app analytics support our qualitative findings regarding core audience ago but also demonstrates a relatively broad appeal across the ages: 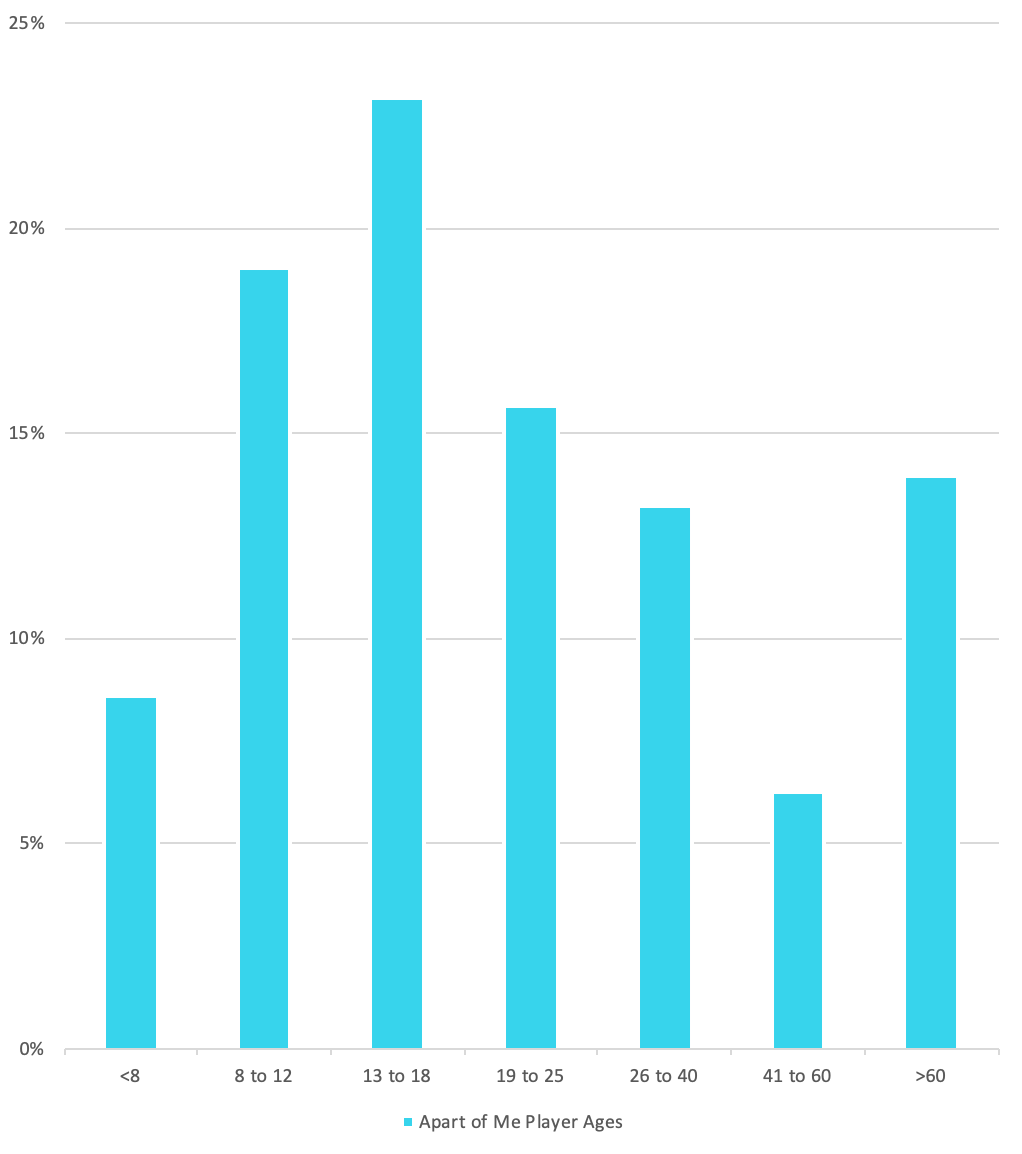 When designing Apart of Me we wanted to support young people dealing with a very ill loved one as well as those who have been bereaved. To distinguish between these different use cases we created 4 routes through the game. Our analysis shows that while the majority of our users are playing following a bereavement many others are dealing with an ill loved one or playing the game for other reasons: 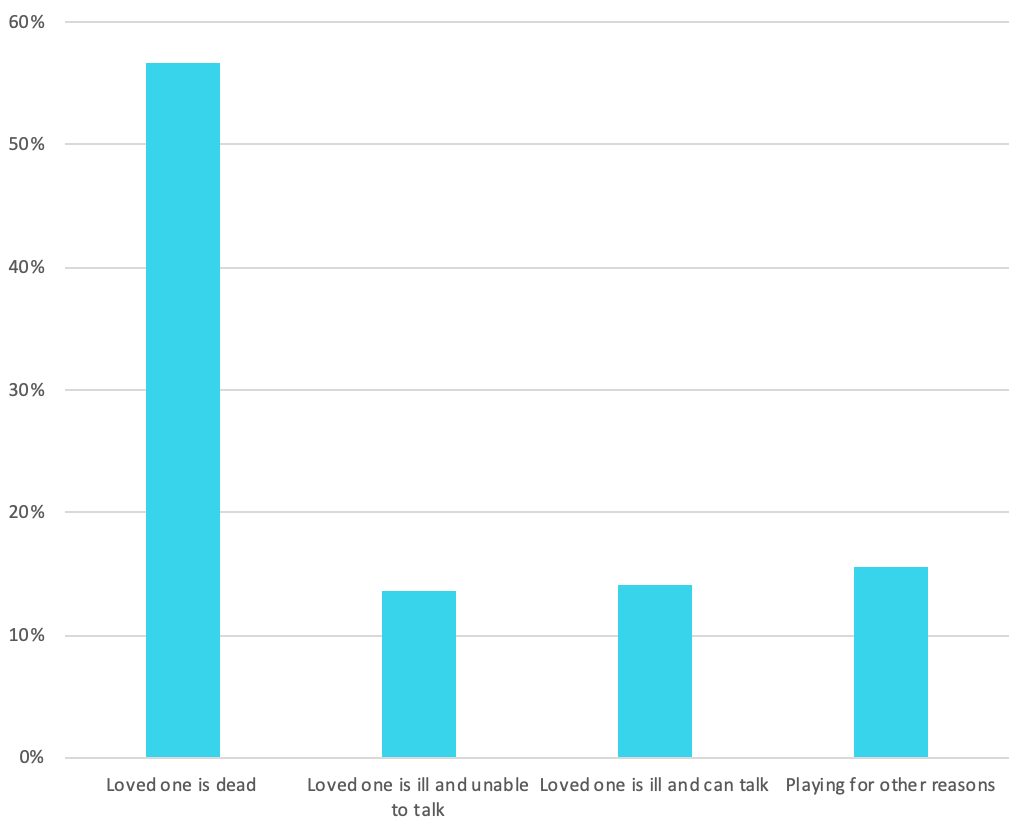 Of those who are "playing for other reasons" the majority are dealing with stress or anxiety:

If you'd like to help us in our mission please consider donating or find out how else you can help!